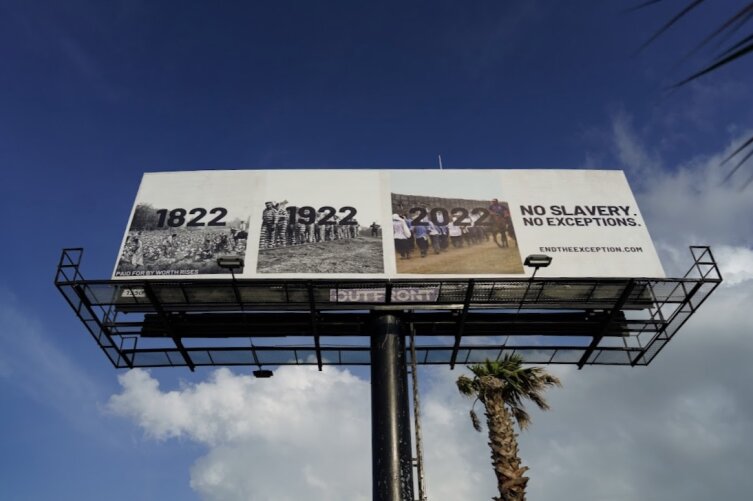 
Ahead of Juneteenth, EP+Co is announces its first project with non-profit organization Worth Rises, a continuation of the federal #EndTheException campaign which is backed by 80 national organizations and led by Worth Rises. The pro bono creative advocates for the Abolition Amendment, a proposed amendment to end the exception clause in the 13th Amendment that allows slavery to be used as punishment and profit via incarceration.

The campaign will launch across social, digital, print and OOH leading up to Juneteenth (June 19). The OOH billboards in Galveston, TX, and Savanna, GA, were chosen for their significance in the abolition of slavery: Juneteenth originated in Galveston as the day Union forces ordered the freedom of all enslaved people in Texas over two years after the Emancipation Proclamation, while Savannah was the site of Special Field Order No.15, a broken promise that formerly enslaved people would receive "40 acres and a mule."

The creative aims to confront the viewer head-on through the use of images of people who have been forced into labor against their will - comparing images of slavery in the South from 1822 to convict leasing and chain gangs in 1922 to prison work crews today in 2022, showing that very little is different. The hope is that by confronting this horrible truth through this powerful message, change can happen after over 300 years.

While more than 20 states are currently organizing to abolish slavery in their state constitutions, 83% of Americans aren't aware that the 13th Amendment legalizes slavery of incarcerated people in the U.S., an information gap EP+Co and Worth Rises are aiming to close through this campaign.

“When advertising agencies support the work of activists, something magical happens. What we can create together is simultaneously humbling and inspiring, and it serves as a powerful reminder that creativity is central to driving change. EP+Co is honored to support Worth Rises and the #EndTheException campaign and their goal of ending the evils of slavery for all. We’re looking forward to continuing our partnership and using our resources to take meaningful and necessary action alongside the organization.”

With some of the most brilliant storytellers and creatives, the advertising industry often sets and controls culture. On most days, that expertise is used to boost brands and drive profits. At a time when our country has been reckoning with endless social ills – from racial inequity to gun violence – it’s time that advertising agencies reevaluate the brands and projects they support, trading those that ignore or even prey on our societal failures for those that promote social good. We are incredibly grateful to EP+Co for doing just that – donating costly staff hours to our campaign to abolish slavery for all. We hope that other advertising agencies will follow their lead and dive into this fight. We’ll need all of us.”

The 13th Amendment includes an exception clause that has been understood throughout history to allow slavery and involuntary servitude to be used as punishment for crime, encouraging the criminalization, incarceration, and re-enslavement of Black people. Today, people who are incarcerated and detained across our country are disproportionately Black and brown and forced to work for little to no pay under the threat of additional punitive measures, such as the loss of family visits and solitary confinement, punishments that also date back to antebellum slavery.

TBWA strengthens global talent team with two promotions
Want to make your company shine?
Showcase Your Work
Add up to 4 pieces of creative work to your company profile.
Boost Your Visibility
Appear above the rest when global brands search for you.
Encourage Direct Contact
Make it easier for clients to reach you by having the right people listed in your profile.
» Switch to a Starter Profile
Start now 更多信息
Otherwise keep editing your FREE page
Any questions?