How a shadowy duo is bringing a touch of Argentine ad genius to agencies around the world. 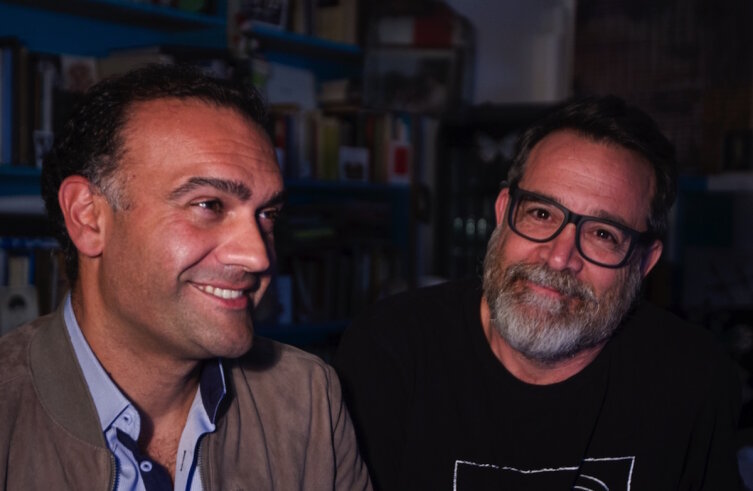 Don’t ask Mariano Favetto and Didier Zakine – collectively known as Les Argentins – who they work for. Chances are they won’t tell you. Describing themselves as “the ad agency that works for ad agencies”, they perform an Intel Inside service for creative directors (and others) who need an extra boost of imagination.

Didier (he's the one on the left) calls it “White Label Advertising”, although since they're undercover you could equally see it as black ops. When you’re on a pitch list and you want an idea with some oomph, these are the guys you call. They’ll put a crew together and help you win the business. Then they’ll turn the idea into a reality. They’re based half in France, half in Argentina, and all over the world.

So how did Les Argentins come about? Didier, the French half of the duo, takes up the story. “I started my career at L’Oréal and then worked for Publicis and an agency called Venise. But nine years ago I took a sabbatical year, and rather than doing nothing I decided to do an MBA. So with my wife and children I moved to Buenos Aires.”

Wait a second: why Buenos Aires? “My wife comes from Uruguay and her best friend is Argentine. I discovered Argentina when we went there for a wedding and I was immediately attracted to its rich culture and sense of creativity. That initial attraction never left me.”

In the midst of his studies he found himself back in France at the Cannes Lions festival, where the Palais des Festivals was draped in an enormous poster reading “Viva Argentina!” Not only was the country bullishly promoting its own creativity, but everyone Didier spoke to agreed that Argentine advertising had something special.

“If you look at the Gunn Report, for example, you’ll see that Argentina is consistently ranked in the top ten or fifteen most awarded countries. So bearing in mind the somewhat defensive advertising that was being done in France, and the lack of willingness to take risks, I thought it might be interesting to import that Argentine touch somehow.”

He envisaged the agency, he says, as “a bridge” between the two countries. After all, anybody who has been to Buenos Aires can see that there are strong links between Argentina and Europe. It was simply a case of bringing them closer together.

Shortly afterwards, he was introduced to Mariano Favetto by mutual friends. Mariano had worked for Saatchi & Saatchi for 17 years: in Buenos Aires, New York, Toronto and Paris. “I actually won the very first Gold Lion at Cannes for Argentina in 1996. Then we won again the following year, which is how I found myself in New York. I toured the world with Saatchi.”

ALL ABOUT THE IDEA

After his Paris experience, however, he was getting a little jaded (“I had the feeling I was striving for mediocrity”), so he took some time out to pursue his parallel career as an artist. He also wanted his children to grow up in Buenos Aires. “I was lucky enough to move back at the same time that Didier arrived.”

Mariano was looking for a new challenge. “I’m interested in creativity, not politics. What attracted me about Didier’s project was that we’d constantly be creating. And that’s what we do. We provide creative, strategic and production solutions. It’s not our job to chase money or beat other agencies. We’re all about the idea.”

He adds that this constant variety keeps him fresh. “I love the fact that we always have new clients, new challenges. It’s inspiring.”

Les Argentins can do everything from providing initial ideas to taking on a whole pitch or shooting a film. They are the entire creative department of one “worldwide agency”, but of course their lips are sealed on who that might be. Their work now stretches well beyond France and Argentina to embrace Mexico, Germany, Canada and the United States. “People move,” says Didier, “and word gets around.”

Although they have small offices in Paris and Buenos Aires, Les Argentins is more of a concept than a structure. Their workforce is necessarily fluid. Mariano says: “We occasionally work with moonlighting agency staff, but actually more and more experienced creatives are freelancing. That’s particularly true in Argentina, where because of the unstable economy there are few creative hubs.”

Les Argentins can create the best team for any given project. Didier says: “It’s creative outsourcing, but always under the direction of two people: Mariano and me. I work like an orchestra conductor, liaising with the agency on the challenge, the strategy and the brief, and then Mariano takes over on the creative side.”

But at the end of the day, what makes Argentinian advertising so great? Mariano believes it’s because his generation loved classic British advertising from the likes of Leagas Delaney and BBH. “We looked to the UK rather than the US for inspiration. We were trying to capture that approach, that humour. But we also looked to creative Spanish agencies like Contrapunto, who had a very different approach.”

British irony and Spanish warmth – you can see why it might be a winning mixture. It certainly seems to be adding a certain je ne sais quoi to agencies in France and beyond.