BBH AND PROSTATE CANCER UK TELL MEN, ‘WE ARE WITH YOU’

BBH and Prostate Cancer UK are this week launching a campaign to establish a new brand positioning for the charity.

With one man dying from Prostate Cancer every 45 minutes in the UK, the disease is quickly becoming one of the biggest cancer killers there is. The new campaign, 'Men, we are with you', aims to raise awareness of the important work that the charity does.

BBH have teamed up with documentary filmmaker Nicholas Jack Davies at Pulse and editor Billy Mead, founder of tenthree, to create a film that celebrates men by showing real life footage of them doing incredible, heart-warming everyday things, both big and small. Its aim is to remind viewers of what we love about men, and what we would miss if we lost them.

The clips feature men who have been personally affected by the disease, along with their families and friends. This includes Ally, a man who has been living with prostate cancer for over ten years, having beaten it once before going into remission. He attests his strength and positive attitude to keeping him fighting. He also runs community support groups for Afro-Caribbean men facing the disease.

The film is set to words from Shakespeare's Hamlet narrated by the actress Zoe Wanamaker, who has a connection to both the Shakespearian words and the cause itself, having lost her father, Sam, to the disease. The film, which launched on ITV last night (Tuesday 14th May) will run from May-July on channels mostly watched by Prostate Cancer’s UK target audience - men and women over 45. The film will be supported with outdoor, digital, social and PR activity.

To amplify campaign messaging shown through various forms of advertising, Prostate Cancer UK has created a powerful display – aimed to urge the British public to celebrate the men in their lives and take action to help beat the most common cancer in men.

Today (Wednesday 15th May), men whose lives have been affected by prostate cancer starred in an eye-catching installation on London’s Southbank. Working with PR agency, Instinct PR, a giant savings jar was created for the men to feature inside, highlighting the charity’s belief that all men are worth saving. Content-driven social and PR activity will continue to reinforce and amplify the campaign activity, and sustain an on-going dialogue with the charities supporters and new audience.

People who want to celebrate and commemorate loved ones and help raise vital funds for research and support services are being urged to sign up to one of Prostate Cancer UK’s flagshipMarch for Menwalking events this summer.

Nick Gill, Creative Director at BBH said: “The one thing that differentiates prostate cancer from other cancers, is of course, that it only affects men. This campaign reminds people why men are worth fighting for.”

Olivia Burns, Director of Communications at Prostate Cancer UK, said: “By celebrating everything great about men, and highlighting the special moments we will lose if our dads, brothers, sons and partners continue to die early from prostate cancer, we want everyone to know that Prostate Cancer UK stands with men and for men.

One man dies every 45 minutes from prostate cancer, it’s a bigger killer than breast cancer. But men, we are with you: when diagnosis isn’t good enough, to fund vital research to provide better care, to campaign for better treatments, and through our support services.” 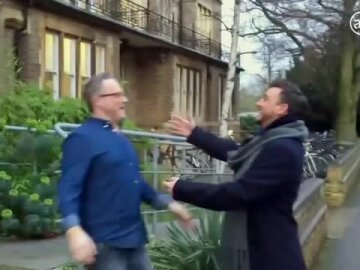 Men, We Are With You