Audi has launched a major new campaign to support their entry level cars. Created by BBH London the work establishes Audi small cars as serious bits of kit packed with just as much technology and attitude as the bigger models. In a cluttered category of nippy, fun small cars, Audi means business.
The film, shot by award-winning director Johnny Hardstaff, opens in a deserted changing room before panning out to an empty swimming pool. The pool, designed and built in Ukraine especially for the shoot, features two models - an Audi A1 and an Audi A7 - performing a perfectly synchronised driving routine. Through impeccable timing, skill and control, the film demonstrates that when it comes to Audi size doesn’t mean compromise. Their compact cars have all the precision, technology and performance you’d expect from the Vorsprung durch Technik brand.
The hero film features the new Audi A1 which launched in January this year. Other supporting campaign assets focus on other entry level models including the new Audi Q3 and Audi Q2.
The film’s soundtrack is a cover of the classic song ‘Follow me, Follow you’ by Genesis. The piece was arranged by Faultline and features the singer-songwriter Rina Oshunga. As with past re-records, Audi continues to celebrate emerging artists; details of the artist will be published on the Audi website and the full music track will also be available to download from Spotify.
Anna Russell, National Brand & Retail Marketing of Audi UK, says: “This is a fantastic opportunity to celebrate the incredible precision and performance of not just the Audi A1 but all our smaller cars. We love the fact that size isn’t a compromise when it comes to Audi.”

Ian Heartfield. Chief Creative Officer of BBH London, adds:
“There is no greater example of two entities matching each other’s moves perfectly than a pair of synchronised swimmers. Swapping two people for an A7 & an A1 seemed like a compelling way to make the point that Audi DNA runs through the whole model range.”
The advert will break on TV on 16th March 2019 during the Six Nations game between England and Scotland. It will play across VOD and Cinema later in the year and will be seeded online through YouTube. The campaign was planned and bought by Omnicom Media Group’s PHD. 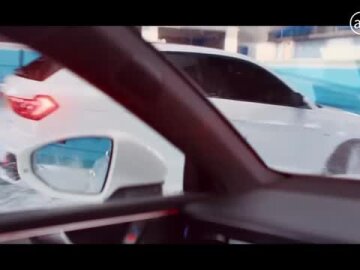